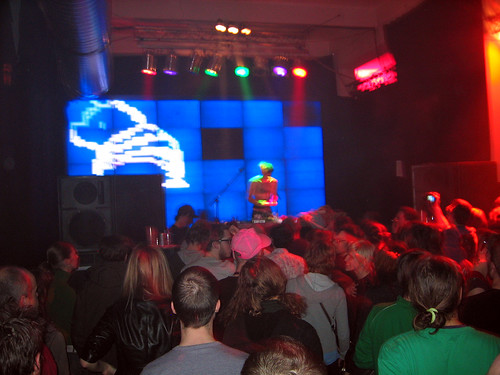 on march 8th, 2008 i played CONFUSE party which was part of the SPERM festival in PRAGUE of the CZECH REPUBLIC. the party was held at PROSTOR ABATON which is a four floor warehouse-gone-partyspace.

i shared the BLIP stage with a bunch of other chip junkies. it was on ground level close to the entrance and sound was provided by VICEAUDIO who did a great job--the bass was huge and tight in the room, the monitors were well placed and matched to the main system, and the crew was super easy to communicate with from the stage. even beyond that, they had no problem with me recording directly off their board so i have clean recordings of every BLIP stage artist from the night, which are being podcast as a series on the twentygoto10 blog.

the other stages were equally well run, right above BLIP was a lounge with couches, projections, merch tables, the bar, and hari krishnas serving up some of the best vegitarian food i ate in prague! the top floor housed the SHOW stage featuring names like MODESELEKTOR, DEADBEAT, and JOAKIM. the WASTED stage took up the venue's basement with JASON FORREST, PURE, SOCIETY SUCKERS, and a few others.

the BLIP floor was packed NONSTOP except for the brief breaks between performers. there was a good mix of people in the space: some stood still while they satisfied their curiosity, some were super eager and had traveled from as far as hungry to meet the 8BITPEOPLES crew, and some were just there to dance their asses off for anyone that took the stage.

my own set went really well with the usual live-mode jockeying between PIGGY TRACKER (on a gp2x f200) and LSDJ (on a gba-sp). i was on top of the queues and mutes, brushing over the janks with quick switches to catchy chains. my off kilter kay-nine-dee beats had people dancing like mutants and humping the speakers, too good!

noteNdo provided circuit bent visuals during my set and he did a nice job mixing in the LGPT logo that noCarrier managed to load up into his NES. the display was a wall of TVs stacked on top of each other behind me, controlled by some incredible home-brewed software with an ANSI interface running on a 286. TVs were falling in and out of the array, adding to noteNdo's bent vibe.

my shirt was off by the end of my first track which properly confused about half the audience and had the other half screaming and jumping. closer to the end of my set i got a lock going on and danced through the crowed, it was cool to take a break and be face to face with the people moving to my music.

about fifty minutes into my set MIKE TANK let me know that i should wrap it up, i was on my fourth sav and wondering what i would play next so the timing felt right. i worked through the last bit of the sav and shouted my thanks to people without using a microphone ... staying raw rather than audible.

the pictures of my set that have been tagged on flickr say more than my words can. big thanks to the SPERM organizers and THE TANK for making it feasible for all the BLIP performers to be in prague. and also thanks and respect to everyone i shared the stage with: herbert weixelbaum, bud melvin, bubblyfish, bit shifter, stu, nullsleep, and 1a2v1.

i'm also am making my set available before it's turn in the podcast series: